7 Reasons Why I Don’t Regret Moving to Samsung 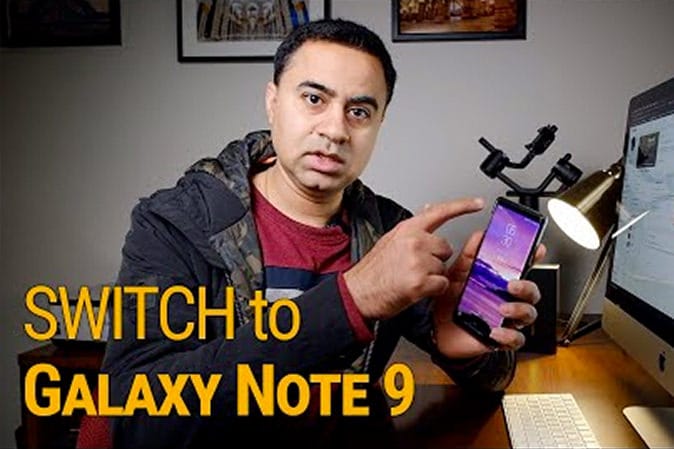 I want to share with you something that I did a few months ago. About six months ago actually I switched over to the Samsung Note 9 after having used a Apple iPhone for about 8+ years and I just want to share my thoughts and my experience so far on this transition after 6 months.

First question obviously you might be wondering “do I have any regrets?” and the answer is NO, I certainly don’t have any regrets moving over to an Android phone system.

I’m actually a techie at heart, so I like technology and moving over to this Samsung and Android operating system essentially, was like discovering smartphones once again. There are number of reasons why I still love using this system as opposed to Apple iPhone system.

I still use an iMac, I still have an iPad, I still have a MacBook Pro, so I’m not moving away from Apple, I don’t hate Apple but I think in regards to the phones they pretty much done what they could do and they’re not really innovating in my viewpoint, to the extent that excites me to spend more and stay with that company essentially.

Whereas with Samsung Galaxy Note 9 like I said it was like discovering a whole new world of smartphones right, so I’m just gonna share some of my reasons I jump down on my list what were the key reasons that came to my mind.

One of my first reasons is the back button. On the Apple phone system you always have to reach on the top left hand side off the phone to hit the back button. Most of the apps have it there. When I was using the iPhone 7 Plus, with the bigger screen I would have to use two hands and that was really a pain.

On the Note 9 the back button is just down here where you’re holding it, essentially you just have to hit the back button and you’re out of the the menu or out of the setting or the app very easy very convenient so I love that functionality.

The second reason is the S-Pen, that is a Note 9 as I mentioned so this has a stylus like pen now the stylus is really great I can just take some notes on the screen and basically I can save those when I want so the screens off just take the pen out start writing and then you can save the note and go back to it later it’s great if you’re taking a drinks order for your friends I might just write them down, go to the bar order all the drinks you want. Super easy super convenient having that stylus.

The other reason is when I’m sharing photos online on Instagram or Facebook or any Insta Stories I can make them a lot more personalised by writing a message which is in my handwriting. The pen is very fluid, I really find it easy and convenient to use.

It has many other purposes like a Remote for the Camera App and so forth but for me being able to scribble and to write and to be able to use the stylus to interact with my screen is it is a great functionality to have in the phone.

The Third reason, is the multitasking capabilities in this phone. Apple have always said their phones can multitask but in my viewpoint and it’s my viewpoint only it’s not really multitask when you have two or more apps running being able to switch between one and two simply means I move from one to the other the other one is running in the background. So I can’t access it right? I always have to switch between.

But here on the Android operating system I can basically watch a YouTube video while I check my Twitter feed.

I can mount two Windows within this large screen and have two apps running at the same time in the one screen and I can interact with both of those apps which is brilliant. Multitasking at its best!!

The biggest feature after that is reason number Five: for me is Fast Charging when you plug this baby in into the fast charger it comes with or wireless charger.

This thing can charge from zero to 50 percent in 30 minutes that’s amazing!!

I’m a frequent traveler so whenever I travel I am in meetings and engagements with clients, workshops and so forth. I might be using my phone for demonstration, for hot spotting and other things, checking emails and so forth as part of my job which means by the time I get to the hotel in the evening this phone has gone really down to 10% or 15% and to then have this plugged in and charged meant I really need to spend an hour in the hotel room for this to charge otherwise I’ve got to carry a power bank things to basically be able to charge the phone when I’m out and about.

However with this phone, just plug this in for 30 minutes and boom this thing charges like crazy, amazingly fast fast charging.

I did see a video that in the next version of iPhone you can or they may be supplying a fast charger with Apple phones but this kind of technology has been around for a long long time, why Apple don’t give those features and options to people who spend a lot of money and are dedicated to their ecosystem.

The other feature, number Six is the battery saving modes. You know when you don’t have a charger nearby and the battery is running low it’s critical state, 15% or less there are about four different modes you can switch the phone to and this means when you switch to one of those modes it basically throttle down the CPU, reduces the screen resolution, screen brightness. There’s another mode, which basically bare bone OS, essentially all you have is your phone your contacts, a browser and so forth. All the other apps are turned off so from that setting, 15% will last you a day which is amazing so you keep the phone for emergency use, everything in the background is turned off. Nothing like that exists on the Apple iOS system so again great functionality they really thought about the users and added those functionalities on the Samsung Note 9.

Finally the last one, that’s a very techie feature. This phone has something called a “developer mode” and in the developer mode you can tinker with the settings on your phone things like; how quickly it will animate and open an app; or switch between the things. There are standard settings and then you can make it even faster.

Can you guess what I’m running? I’m running the faster setting because I like that quick access capability being able to get out of the app quickly and move to the next one and do whatever I need to.

Alright those are some of my reasons like I said in the beginning of the video I don’t see myself moving back I don’t have any regrets I’m also using the Galaxy watch which integrates with the phone and synchronizes all the things that I need I’ve also found a lot of apps and things like that that I used on my iOS phone on the iPhone and now I have the alternative or equivalent app on the Android system so if you have been wondering and wanting to switch from iOS and Android system.

Hopefully these few points will help you decide whether that’s the right switch for you in regards to apps and so forth I plan to do another post where I’ll share all the equivalent apps that I have on this phone and more actually with the stylus I have a lot more capability that on this phone as opposed to the iPhone and I’ve been really happy with using all the apps and rediscovering new apps on the Android system so thanks for stopping by to ready my post.